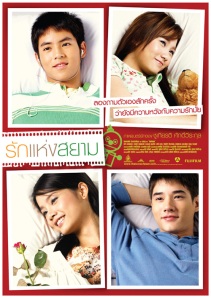 “Love of Siam” is a brave film. It is often advised that a story should be about one thing, one major story thread. Clocking in at 160 mins, this Thai melodrama has two. Firstly, it is about the relationship between two boys, Mew and Tong, childhood best friends, as they come of age. The second thread is about how Tong’s family deals with the disappearance of Tong’s elder sister in the forests of Chiang Mai and the appearance of another girl who looks like the sister.

“Love of Siam” has enough story for a TV drama series, and is condensed into a long feature film. Having two major threads in a story makes the film seem unfocused. Is it a coming of age love story, or is it a disappearance mystery with a filmic doppelganger? To add, it has several more sub-stories.

The film would have been stronger if it focused on the coming of age love story between the boys. They are more interesting characters and their relationship seems to be the bigger dramatic question of the film: will they end up together? Despite its length, “Love of Siam” was not tedious to watch. The actors, who are very easy on the eyes, help make the lengthy film easier to sit through.

(MINOR SPOILER) Unfortunately, the film’s conclusion is quite unsatisfactory, and the second reason why the film is brave: It ends on a poignant note. Does it make it more realistic? Probably. But why does it have to put the two boys through all that pain and not end more happily?